I’ve moved many times over the years and most of the movers I dealt with were not only honest but really helpful. But I have had some important documents stolen, including my birth certificate. And I once had a mover try to shake me down for my guitar.

These moving tips will help you protect your valuables in case you find yourself dealing with dishonest movers. Note: many of these tips came from honest movers I’ve worked with.

When your boxing things up, it’s tempting to write on your boxes what’s inside them. But that tells movers exactly where to find your valuables.

It’s easy for a mover to open a box, take out a few valuables, rearrange the stuff and tape it back up. You discover the theft only after completing and paying for the move.

So how do you index your boxes so you’ll know what’s in them without alerting dishonest movers? There are several ways to go about it.

1. Colored tape. Movers don’t generally carry colored tape, so you can tell if they’ve opened a box and resealed it with clear tape. You can order colored packing tape online at a reasonable price.

You can also use different tape colors to code priorities on your boxes. Say, read for boxes you should open up immediately, orange for less urgent ones, and yellow for the least urgent.

2. Mark boxes with priority numbers. This is really simple and doesn’t take much time. You just make a “code sheet” telling you what each number means, and then use them. Or:

3. Make a complete index if you have time. Mark every box with its own number and keep a paper or electronic list (which the movers never see) documenting every item in each box.

This is obviously the very best way to be organized; unfortunately, most of us won’t have time. You can always do a modified version so you keep up with those items that are most essential.

4. Pack cheap stuff on top of valuable stuff. Pack your valuable stuff at the bottom of boxes and put trinkets and cheap, easily replaced items on top. This makes it seem like all your boxes only contain low value stuff.

5. Wrap every single item in newspaper, and then tape the newspaper closed. Forget bubble wrap and styrofoam packing peanuts. Not only are they not eco-friendly, they also don’t work as well as newspaper for protecting fragile items from breaking.

I’ve gone through multiple cross-country moves with newspaper and had almost no breakage. And it doesn’t take much time to wrap (and later unwrap) everything in it – even the trinkets.

But there’s an added benefit to wrapping in newsprint or newspaper.

If a dishonest mover opens a box full of items hidden in newspaper, then he has to break open the tape or carefully peel it and try to stick it back (which never works) to hide that he looked through your things.

And if he does unwrap them, he’ll only find cheap items, which as we discussed above will make him more likely to give up before he gets to anything valuable.

For items you’re afraid will transfer the ink from a newspaper, buy some newsprint (unprinted newspaper). Newspaper ink has rarely transferred to my items, and when it did was always easily rubbed off, usually with a brush of my thumb.

6. If you use plastic transparent cartons, make sure items aren’t visible inside. Wrapping everything in newspaper will do that trick. Or you could line the whole carton with newspaper.

7. Don’t be specific when asked what’s in a box. Movers need to know what sort of materials are in a box so they can determine what can be stacked on top of what, so they’ll often ask, “What’s in this one?” In the past I used to tell them specifically what was inside, but then a mover stopped me and politely said, “I don’t need to know that – just tell me, is it glass or what?”

He didn’t even want to know where my valuables were for fear something would get accidentally lost and he would be blamed. Smart man.

When asked what’s in a box, don’t say, “My grandmother’s irreplaceable china,” just say “Dishes.” If you want to impress on them that a certain box is priceless to you, don’t: just tell them “Be careful with this one, it’s glass/fragile/already has a break I sealed with Krazy Glue.”

That doesn’t indicate whether it’s worth anything on Ebay or not. They don’t need to know.

8. Consider shipping really valuable stuff – maybe. I have mixed feelings about this tip. Someone I know shipped a $12,000 machine part via UPS in a double-locked container as part of her job. It just happened to somehow fall open and lose all its contents (into the hands of someone who fenced it, we feel sure).

Shippers can be dishonest, too. The difference is, you can insure your valuables and process a claim in most cases. Of course, it’s declaring what they are to the shipper that would tempt a shipper to steal them.

I personally have never used this option, but it’s there for you to consider.

9. If you’re concerned, pay special attention to boxes they stack on the bottom in your new home. Most of the time, movers make a big stack of boxes in your new place as they carry them off the truck. If your gut is telling you these guys might not be trustworthy, pay special attention to the boxes they stack on the bottom of the heap.

Those boxes would be the last ones you get to, and that’s where someone would put a box that’s been tampered with. The sooner you spot tampering, the easier it is to prove your case.

If you’re too busy during the move in, you might be able to assign a child (if you have one) or a new neighbor you trust to look at the boxes and let you know if anything looks wrong.

10. Photograph the boxes before and after. When I first wrote this post, you needed a digital camera to do this easily. Now you can just use your phone.

If you label each box with its own number (see tip No. 3), photograph it when it’s all sealed up. You can take the photos with you on your phone for easy access, or on any laptop or computing device you’ll be carrying with you.

Then photograph the boxes when they come off the truck. Compare each box with its photo, and any tampering should be easy to see – and easy to prove.

I hope I’m not making anyone paranoid about movers. I’ve moved a lot more times than I’d have liked to, and aside from a couple of incidents I never had a problem. It’s just that you don’t want to be the exception when something actually does go wrong. 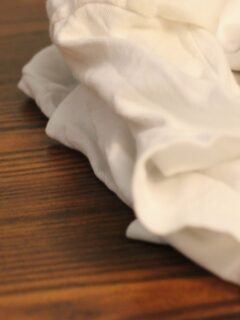 Next
Thanksgiving recipes and tips