Why You Need a Cast Iron Skillet

Have you ever wondered more and more people are using a cast iron skillet? They’re heavy. They have to be “seasoned” before every use, whatever that means. It sounds like a lot of work, right?

They’re also relatively easy to clean and care for, even though the routine may sound unfamiliar and intimidating at first. Once you get used to it, it’s easy.

So which ones should you buy? Are they all the same? Do you need several, or just one?

Let’s jump right in and show you some very good cast iron skillets to buy, just in case you’ve already decided to buy. There are so many to choose from, but you can’t go wrong with any of these. They’re pre-seasoned, so you don’t have to worry about that. 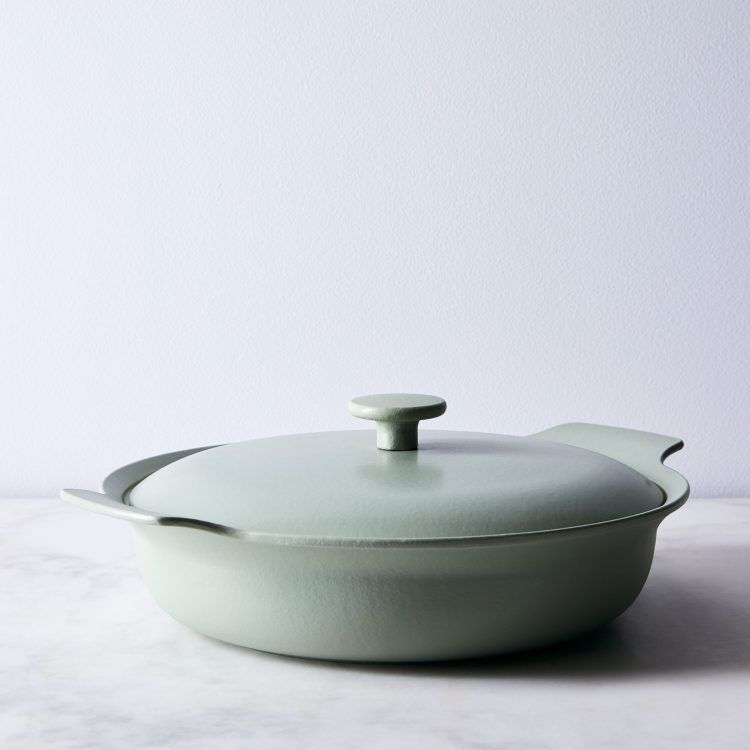 This lidded skillet from Food52 is beautifully and functionally designed. The short, wide handles are easier to get hold of with oven mitts than a traditional long handle.

The included lid is heavy to lock in heat and steam for even cooking. It’s just as much cast iron as any other skillet, but the enamel green makes it gorgeous.

This Victoria skillet from Amazon is seasoned with flaxseed oil and ready to go as soon as you get it. It’s a 12 inch diameter, which is big enough for most foods without being too big to fit on your stove burners.

Lodge has long been considered one of the best brands for cast iron skillets. This very affordable Lodge skillet from Amazon comes pre-seasoned so you won’t have to worry about that.

This size is 10.25″, which may be a little more comfortable for some stovetops. It’s also a little lighter and easier to handle than a 12″ skillet.

Benefits of Cooking with Cast Iron

As we mentioned above, there are a lot of reasons to put up with what you might see as the downsides of cooking with cast iron.

Cast iron is often more affordable than stainless steel cookware. And it literally lasts for generations. Even if you think a skillet is ruined, it’s always fixable.

If you’ve heard stories about cast iron rusting, be aware that it won’t rust as long as it’s seasoned properly. And even if it does, it can always be fixed.

These skillets hold onto their heat for a surprisingly long time. That makes it much easier to sear meat than with most types of cookware.

They also do a wonderful job browning sauteed vegetables or crisping and browning the edges of cornbread. This gives these dishes some extra flavor and texture that makes them so special.

You can cook over an open flame with cast iron. That means you can take your cast iron skillet on your next camping trip.

It’s also wonderful for cooking over a backyard fire pit or on top of a grill. This makes it a great addition to barbecues and outdoor parties.

If you keep cooking with it and seasoning it, it will become non-stick. It will be as good as any non-stick pan ever was, but without chemical treatments or safety concerns.

All this talk of “seasoning” may make cast iron sound like it needs all sorts of extra care. But it’s really just as easy to care for as any other cookware.

Many people believe everything tastes better cooked in an iron skillet. This is a widely shared opinion rather than a fact, but if you find you agree, you’ll be so glad you started cooking this way.

Doesn’t it also add iron to your food?

You may have heard that using a cast iron skillet will put more iron into your food. This is true, but it may not work quite the way you imagine.

First of all, it’s hard to say exactly how much iron actually transfers. And the older and more seasoned your skillet becomes, the less iron is likely to transfer anyway.

So while getting iron in your food is definitely a benefit of cast iron, don’t think of it as a guarantee you’re getting all the iron you need. You still need to eat iron rich foods.

How to season a cast iron skillet

So how do you season a cast iron skillet? The good news is, you probably can’t even find skillets that aren’t pre-seasoned from the manufacturer these days. But…

That’s just the initial seasoning. It does save you some work, but you also need to “season” your skillet before every use.

But seasoning is really just a simple step in the cleaning process every time you use your skillet. Just think of it that way, and once you get used to it, it’s easy.

In a nutshell, seasoning is about applying oil. That’s it, really. A lot of oil gets added naturally when you cook foods that have natural fats.

Seasoning is actually one step of the cleaning process. So the real question is…

How to Clean a Cast Iron Skillet

Clean it with water and a pot scraper or silicone scrubber. You don’t need soap.

As with any cookware, this is easier to do while the pan is still hot. But since cast iron retains heat for so long, y

Experts say you can use a little bit of soap. Southerners say this will rip a hole in the space-time continuum and destroy the universe.

I’ve never used soap on mine and it’s fine. I do sometimes use a dish cloth with residual Dawn dishwashing liquid on it if something doesn’t want to come off. But I don’t add soap to it.

If you do use soap, the important thing is to rinse and dry it thoroughly as soon as you’re done. Don’t ever let soap or water sit on your skillet.

Dry your skillet thoroughly with a towel. You don’t want even a hint of water on it when you’re done, because it would get trapped under the oil in the next step and could start your skillet rusting.

Just to be safe, I also let mine sit and air dry for a few minutes while I’m putting dishes in the dishwasher or wiping countertops.

Rub a very small amount of cooking oil all over your skillet – the bottom and sides. You can use any oil or fat you cook with, including bacon grease. (Cast iron skillets are great for cooking bacon, and bacon is great for your skillet.)

Now rub off the excess oil with a paper towel. And that’s it. You’re done.

Tips for Cooking with Cast Iron

On the stovetop, you should never put food into your skillet before it has heated. This should take about 5 minutes.

You can test whether it’s hot enough very easily.

Using Cast Iron in the Oven

It will brown the edges of these items nicely, adding flavor and a bit of texture.

You may have heard that acidic foods – like tomatoes, vinegar and lemon or lime juice – can ruin the seasoning on cast iron cookware. This is easy to avoid.

Gear for Your Cast Iron Skillet

Did you already or inherit a cast iron skillet that didn’t come with those nice silicone handle covers? That’s no problem.

You can buy generic covers that will work with most brands of skillets. This skillet handle cover set from Amazon has a cover for two different handle sizes, plus another one for helper handles.

You probably know how useful a bacon press can be for making sure the meat cooks evenly and doesn’t curl.

But presses are also great for making grilled cheese sandwiches, quesadillas, hamburgers and more. You can also use it as a steak press.

Sometimes you need to put a lid on your skillet. My lid, pictured above, is a Lodge 12-inch skillet lid. This universal lid fits any round skillet from 7-12 inches. Both lids are clear so you can see through them to check on how your food is cooking. 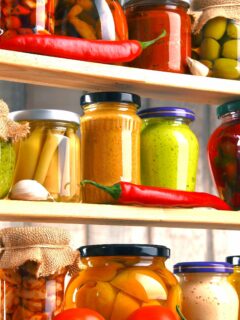 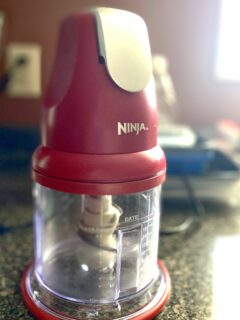 Next
Our Favorite Kitchen Gear
Comments are closed.