A while back, I wrote about the impossibility of escaping DirecTV cancellation fees, and they really do not state in the fine print that every time one of their crap DVRs breaks down and they replace it, your contract automatically renews for another 1-2 years. Surprise – you’ll never be out from under that contract. 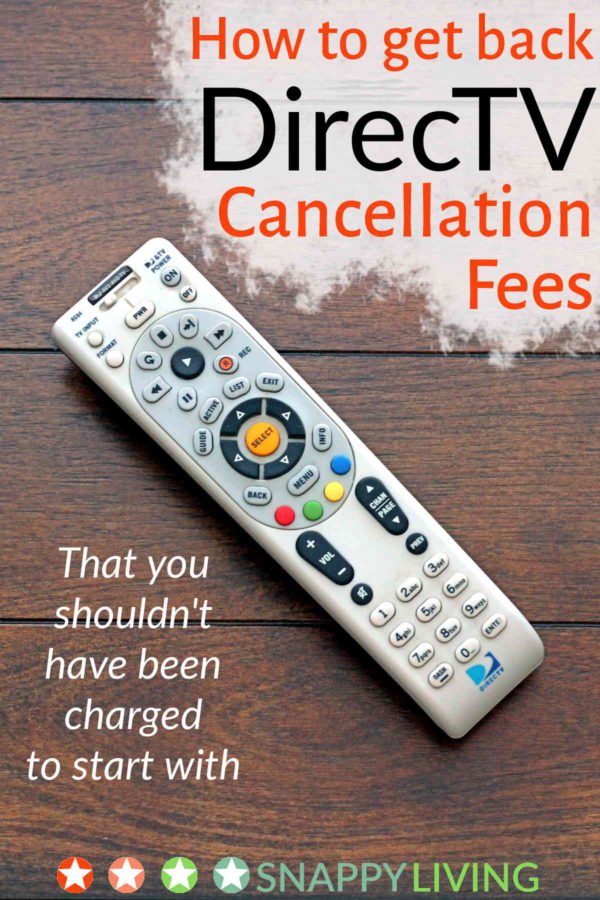 Turns out I have some really smart, savvy readers here at Snappy Living. Several of you tried various ways of getting out of your cancellation fees, or getting them refunded.

Doug found the solution, and it has worked consistently for various readers (see the comments) for a couple of years now. Please note: Doug’s solution will probably not work if you’ve been with them less than two years. If that’s the case, they don’t care if you’ve been transferred to Pluto. They probably don’t even care if you’re dead.

But there is another way to make them waive the cancellation fees – keep reading.

One last note before we get to the solution: if it’s a practical option where you live, you might want to dump satellite/cable altogether and just go to streaming. I did it in 2009 and I haven’t missed it at all.

Several of my friends report that the Roku Premiere HD and 4K UHD Streaming Media Player lets you access a ton of channels and streaming options. I still like Netflix because it has a lot of great current shows and documentaries, absolutely no commercials, and it lets you limit the HD quality so you won’t go over your bandwidth cap, if you have one.

And of course there’s Hulu, with classics like The Mindy Project and Daria. And there’s Amazon Prime, which carries originals like Bosch and The Man in the High Castle and has lots of other benefits, like free two-day shipping.

I have Netflix, Hulu and Amazon Prime, and I still don’t pay half what I was paying for cable. And instead of 100+ channels of stuff I just flick through in a haze of discontent, I have a ton of shows and movies I can watch on my schedule.

Don’t waste your time with their customer service department (800-531-5000). Forget billing dispute (the Colorado address you have to write to). Call or write their corporate headquarters in El Segundo, CA, and it’s like you’re dealing with a whole different company.

Doug got jerked around by Customer Service for a bit, then:

I wrote a letter to John Malone, who is Chairman of DirecTV in El Segundo, California, explaining my “frustration.” I have no idea what he’ll do, but I explained that I will do everything I can to make people aware of this ridiculous business practice. I also read about the class action lawsuit in California, and emailed the lead attorney to get some more information. If he writes me back, I’ll post here.

This worked for Doug, who received a polite response. The letter did not accept any blame or fault – they’re making a “business” decision to settle things “amicably.” Read: “Oh, noes, we’re already gettin’ class action sued! Better play nice!” But hey, he got his money.

Around the time Doug got his lovely reply, I got a meaningless form letter back from Billing Dispute in Colorado refusing to waive the cancellation fees. I decided to skip the letter writing and just call the El Segundo number Doug found: 310-964-5000. To my surprise, the entire phone call only took about 7 minutes.

Update December 22, 2018: readers keep saying the number is out of service or redirecting to the 800 number. But that is only when the number is busy. Keep hanging up and redialing until someone answers. I’ve tested this and it still works.

At first, you get a recorded greeting, and then it starts ringing. It may ring quite a few times – over ten both times I called. Then someone answers, and you say you’ve got a problem with a cancellation fee and Customer Service refuses to help.

He puts you through to the “Office of the President”, where someone answers immediately. In my case, she listened to my complaint, and then put me on hold to review my account. She came back within two minutes to say they would refund the cancellation fee.

I was afraid it was too easy. She had also said it might take ten business days to show up on my credit card. I gave them that, and it still wasn’t there. I called them again, and this time the call took only about three minutes. They reassured me they were processing the refund that day and it would show up on my card in a couple of days. And so it did.

Here is the contact info for the El Segundo office:

Good luck! If you care to share, I’d love to hear in comments how this works out for any of you who try it. This company really needs to be forced to revamp their policies.

I don’t have a problem with contracts and termination fees in general, but with DirecTV: (1) their DVRs never last two years, and getting them replaced means your contract auto-renews, but nowhere in the fine print does it say this, and (2) cancellation fees should not be that high, ever.

If you’re still in the two-year contract

The above method probably will not work if you’re actually still within your contract period, but canceling for a good reason. Such as: you’ve moved to a place where satellites are not allowed and literally won’t have the service you’re paying for, or DirecTV lied to you about something when they signed you up.

In that situation, the President’s office won’t help, but you can do what several of our readers have done – call the BBB and report DirecTV for their shady business practices. Within a few weeks, most of those readers got to quit without cancellation fees, or got their cancellation fees refunded.

Reader Lucia just mentioned the BBB and the class action suits to the customer service rep, stating that if the supervisor didn’t remove the cancellation fees, the call would end and Lucia would phone the BBB. That worked for her.

Many people want to keep DirecTV, but have to move to a place that doesn’t allow satellite. Reader Sam Murch got out of a contract by having them come out to install it at the new place.

Sam’s apartment did not have a “line of sight” to the satellite, so DirecTV had to cancel the contract. However, reader Rob reports being required to get two contractors out for a cost of $100 to confirm the line of sight issue, and they still insisted he pay the cancellation fees. Unbelievable.

As an Amazon Associate, SnappyLiving earns from qualifying purchases.