There’s an art to saving money at farmers markets compared to grocery stores. The prices aren’t always lower, but there are other factors to consider that make farmers markets a better value for the money.

And there are also some easy tips to make sure you actually spend less than what you would at a grocery store, or come away with better produce.

I’m afraid I have to warn you about a sort-of scam happening at some farmers markets. It used to be the farmers market was a sure bet if you wanted to get better produce or spend less than you would at the grocery store.

Not so anymore – now some farmers markets are simply flipping grocery store produce and selling it at higher prices, hoping you’ll assume it’s worth the extra cost. And people are falling for it.

Note both prices and brands of produce available at your big chain grocery stores. If you never go near chain stores, I would suggest you do so once in a while – just take a few photos with a digital camera or phone camera of brand labels and price stickers so you have a point of comparison for the farmers market.

Do not assume your farmers market is so reliable they wouldn’t do this. I’m seeing this practice at renowned, respected farmers markets. Now, sometimes chain grocery stores sell stuff from the same local farms as farmers markets, and that’s okay. But if the farmers market wants significantly more for it, that’s crap.

How to get the best bargains at the farmers market

Some items are cheaper at the farmers market, others are more expensive. It’s pretty easy to come out even with what you’d have spent at the grocery store and have better quality food to show for it. But to save money:

1. Bring a notebook (or phone app) so you can write down prices on certain items from one stall to the next.

2. Walk the whole market before buying anything. One stall may sell tangerines at $1.50 per pound, and the next will be $1.25 (usually the quality will be about the same). By checking every stall first and taking notes on the items you want, you’ll get the best price.

3. Buy in bulk only if you can use (or preserve) the food before it spoils. Bulk cooking is a great way to do this.. No bargain is a bargain if you’re going to end up losing some of what you paid for.

4. Bring family or friends so you can split bulk purchases.

5. Talk to the stall keepers. It doesn’t happen every time, but sometimes if you engage them in conversation about the produce, they’ll throw in an extra piece or offer you a bargain. They may also suggest recipes you never thought of or educate you on produce you’ve never tasted, which is another great form of value.

6. Bring your own bags – whether you reuse plastic bags or bring canvas totes, the fewer plastic bags they have to provide, the more they will save, and the more savings they can pass on to you.

7. Go at the end of the day, when stall keepers often bring down prices to sell off what they have left. This can backfire if the market is really popular, and people buy up all the good stuff early on. But generally, this isn’t the case.

8. Try more than one market. If there are several in your area, some may have better bargains than others.

9. Be flexible – being willing to try unfamiliar produce items can save you money and expand your palate!

10. Bring lots of change – singles and also coins (mainly quarters). Since most people don’t, farmers can have a tough time keeping enough change on hand. If you’re able to pay in exact change or close to it, they sometimes give you a little something extra for your consideration.

11. You can offer to pay with skills instead of cash. Got a way to publicize them? Do their tax preparation? Some farmers are happy to barter.

And don’t forget about meat and cheese. Many markets offer them, and you will often get better much tasting products from livestock that’s been kept in a relatively humane manner. 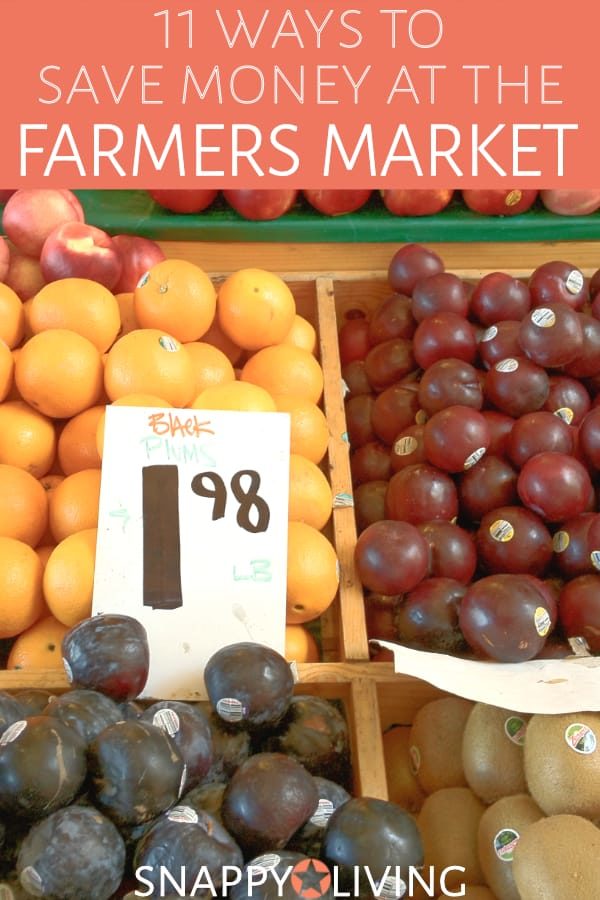