This pumpkin spice dip is one of the easiest recipes I’ve ever shared here. It’s so quick and simple, you can whip it up in about 15 minutes. But it tastes amazing, and is perfect for fall snacking.

Plus, there are two variations on it – with different seasonings – so you can make it the way you prefer, or alternate from one time to the next.

The consistency of this dip is somewhere between a mousse and pudding. It’s thick enough to be spread on a bagel, toast or cracker, but thin enough that you can dip pretzels or chips of any sort into it.

With pretzels, it’s a fantastic salty sweet snack. With chips… okay, probably not everyone’s cup of tea, but it reminds me of those potato chips dipped in chocolate, which some people love.

Be forewarned: this is a rich dip, and it will fill you up faster than you might expect. That makes it great for snacking while watching a game, but if you’ve got a meal planned for later, make sure there’s at least a half-hour between serving this and the meal.

I totally recommend these adorable pumpkin ramekins to serve it in. You get a set of 6, and you can serve the dip individually to six people (I would only fill it up about halfway, though) or put several of them around a big table for sharing.

The basic recipe calls for canned pumpkin, cream cheese, honey, cinnamon and nutmeg. But, optionally,  you can add ginger and vanilla to the lineup. You could also use maple syrup in place of the honey.

This dip includes cream cheese, which is why it’s rich. I used regular Philadelphia. I don’t use anything “low fat” for dairy, because they always compensate by adding sugar, which is worse for us than fat is.

If you do use a reduced fat version, it will be a little bit sweeter, so you may want to reduce the honey. But probably not, because this version is not very sweet.

For the canned pumpkin, you just want something that’s 100% pumpkin. I’m not sure the brand matters. I used Libby canned pumpkin because I’ve used it before and knew it was good.

The reason this recipe is so quick and easy is that you just add everything together and stir. There’s no cooking, no chilling, no nothing else involved. You, a bowl, the ingredients and a spoon.

This is great as a dip served with pretzels. It’ll work with a lot of salty snacks, such as pita chips, potato chips and many crackers.

It’s only lightly sweet (unless you want it sweeter, in which case you add a little more honey), so even guests who aren’t too sure if they like salty and sweet together will probably like this dip.

It’s also great on a bagel or toast, or spread on crackers.

This tasty pumpkin dip is great all year round. The pumpkin spice flavor is mild, and so is the sweetness, but you can add more spice and honey to make it bolder and sweeter. It's great as a spread or a dip.

Did you make this recipe?

If you don’t serve it immediately, store it in the refrigerator since it’s mostly dairy. As for how long it’ll keep… you can probably go by the expiration date on your cream cheese, but to be safe I would assume the pumpkin part might go bad before that. If it smells different than it did when you made it, assume it’s no longer your friend. 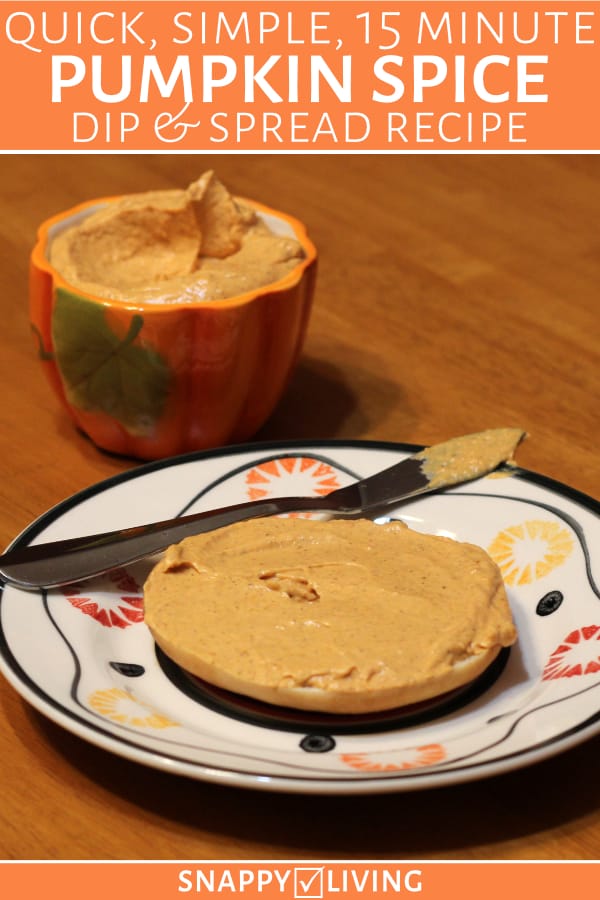